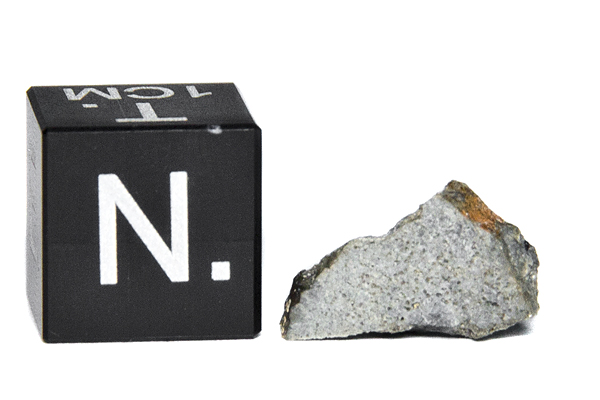 «This diogenite is inhomogeneous, in that some portions of the stone have a plagioclase levels >40%, making these regions noritic. But bulk density of plagioclase <10vol% overall and by definition makes this a feldspathic diogenite (I actively search for these rarities and have classified NWA 6928 Noritic Diogenite and NWA 8367 Feldspathic Diogenite). This 0.07g part slice contains vesicles or vugs, which are voids or bubbles in the stone that formed when a highly energetic event involving the parent body in space melted the rock. In the opinion of the analyzing scientist, this is one of the most highly shocked diogenites he has studied. These vesicles are rare in meteorites, and only found in a handful of known meteorites, including Ibitira and Dʻorbigny (see accompanying photos, not included in this sale) – so this meteorite is in good company with respect to its anomalous characteristics. This slice comes off a 185g individual which was acquired from a Moroccan dealer in October of 2014, and is part of a larger 11kg stone that is owned by an American dealer. «